St. Petersburg is a truly unique Russian city that combines grand 18th century architecture with urban vibes of a modern city. There are a lot of monuments in St. Petersburg that are hidden from our eyes but they still deserve being known. Keep your eyes open and learn about the most unusual alternative attractions of the city hidden behind the imperial facades.

Russian people are very superstitious and have many different beliefs. You can find tons of monuments in St. Petersburg that you can rub or touch for

luck, make a wish or throw a coin. One of them is called Chizhik Pyzhik. It’s a little bronze birdie that is sitting on a granite perch at Fontanka river. If you throw a coin on the perch and it stay there, you wish will come true. Don’t forget to make a wish before doing so!

Chizhik-Pyzhik, where’ve you been?
Drank vodka on the Fontanka.
Took a shot, took another –
Got dizzy. 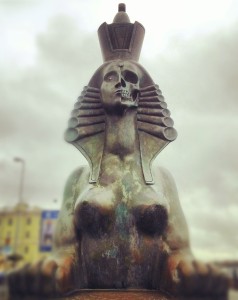 Monument to the Victims of Political Repressions

Surprisingly, there are a lot of sphinxes in St. Petersburg located in different parts of the city. Two of them are placed on Robespierre Embankment. Right on the opposite side of the Neva river you can find the Kresty Prison. This location is very symbolic. The point is that it is the. The faces of sphinxes are divided into two halves — from one side they have beautiful female faces, from the other one, overlooking the Kresty Prison, they are skulls. The monument reminds us of thousands of people who were arrested and died in the prison during Stalin’s regime. You can learn about other St. Petersburg Sphinxes here. 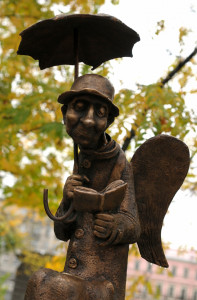 In the Izmailovsky garden, not far for the Fontanka river, you can find a monument called St. Petersburg Angel. It’s an old fellow sitting on a garden bench and reading a book. According to its author, Roman Shustrov, the angel symbolizes all the older generations who went through the wars, hunger and repressions and made it to keep spotless minds and harmony in souls. The angel has an umbrella in one hand – giving us a tip of what to take with you when you go out in rainy St. Petersburg.