Are you planning a trip to St. Petersburg, Russia soon, but can’t decide on what places to visit in this marvellous city? It is important to make priorities in the tourist activities, so that you didn’t waste your time. St. Petersburg is the artistic and cultural capital of the country, and has a lot to share. In this article we overview Top 10 St Petersburg Tourist Attractions.

The first thing on your wish-list will probably become The State Hermitage. Being the biggest museum in Russia, it houses over 3 million precious exhibits in different spheres of art: painting, sculpture, applied art, glasswork, porcelain, embroidery, ancient artefacts… The list can go on forever. No wonder why it occupies so many buildings. The Hermitage is not just The Winter Palace, but a number of structures forming the Main Museum Complex: The Winter Palace and a couple of buildings that were constructed later in the 18-19th hundreds. It is the most well-known gem, located in the heart of St. Petersburg, that attracts thousands of visitors every day. Don’t miss a chance and visit The Hermitage without wasting your time in lines. With an accredited tour company like Hello Russia Tours you can get a skip-the-line admission to Russia’s finest museum. Find more details about our private tour to the Hermitage on our website. 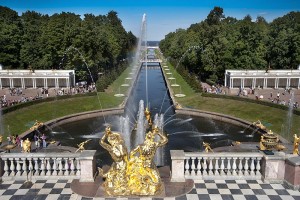 Peterhof is home to many imperial palaces and gardens, which makes it one of the most visited St Petersburg tourist attractions.  Around 2,2 million people come to Peterhof every year. Peterhof Museum Complex includes 150 fountains, 7 palaces and 23 museum structures. The most important highlight of Peterhof is its fountain system. Every day at 11 a.m. thousands of tourists gather in the Lower garden of Peterhof to see for themselves how the fountains start their day. The idea of creating the beautiful residence struck Peter the Great during his diplomatic visit to Versailles. The Russian tzar was very inspired by the beauty of the French residence, so upon his return to Russia, he started the construction of what later was called ‘The Russian Versailles’. As a result, Peterhof Grand Palace was built. It was used as an official residence of the Romanovs, where lots of beautiful receptions and balls took place. We are happy to announce that Hello Russia Tours organizes private tours to Peterhof to make the most of your visit to this beautiful museum.

3. The Church on the Spilled Blood 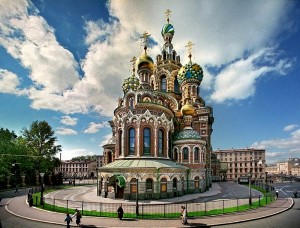 This colorful church with onion-shaped domes is located in the historic heart of St. Petersburg, not far from Nevsky Prospect. It was constructed in the bright Russian style to the memory of Alexander II, the Russian tzar, who was fatally wounded by a terrorist. Later on the church was constructed on the very place, where the blood of the tzar was spilled. The church is dedicated to Jesus Christ, because Alexander II was compared with Jesus Christ. He wanted to make people’s life easier, but his efforts were not duly appreciated. The church has a lot of mosaics that decorate the walls inside. Over 7000 sq.m. decorate the entire interior of the church. In the Soviet era the church was closed. The soviet authorities were going to demolish it, which never happened in the end, since the WWII broke out. 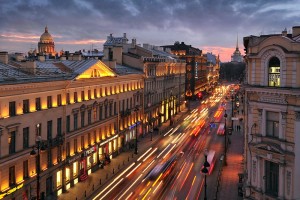 What can be better than having a nice leisurely walk along the main city’s street? Its name is Nevsky Prospect, St. Petersburg most iconic street. It stretches for over 2 miles, and has lots of restaurants and cafes lining along the street. It is also the best shopping strip that you may find in St. Petersburg. Nevsky Prospect is a great area for buying memorable souvenirs and gifts from Russia. Don’t miss a chance to have an enjoyable walk along the prospect, grab a drink on the way, and take a few memorable pics from the very heart of St. Petersburg. 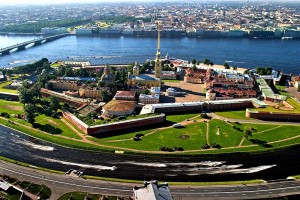 Peter and Paul Fortress, St. Petersburg’s official citadel, is known to be the birth place of St. Petersburg. It was constructed under order of Peter the Great for protection of the nearby lands. In 1700 Peter the Great started the Northern War against Charles XII of Sweden to get the lands of the Baltic coastline, that earlier had been captured by the Swedes. The Fortress was constructed in 1703 right during the course of the war. The original structure was made of wood, but later it was modernized and rebuilt in stone. 27th of May, the day when the construction started, is today celebrated as St. Petersburg’s birthday.

6. Catherine Palace with the Amber Room 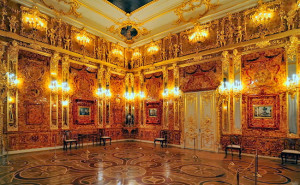 The stunning Catherine Palace was created by the daughter of Peter I, the Russian empress Elizabeth. She appointed Francesco Bartolomeo Rastrelli court architect, who created the project of the magnificent palace. It is located some 16 miles from St. Petersburg. The palace is named in honor of Elizabeth’s mother Catherine I. The most well-known highlight of the palace is the Amber Room. Its story goes back to Peter the Great’s time, when he received the room as a diplomatic gift from a Prussian king. The Catherine Palace was constructed in beautiful baroque style. Later on it was extended under the reign of Catherine the Great, and some alterations of the interiors took place inside. Developed over two generations the residence displays a great mix of baroque and neoclassical architecture, a nice collection of porcelain sets, clocks, chandeliers and whatsoever, that belonged to the Russian royals. Without any doubt, being one of the most significant St Petersburg tourist attractions, the palace deserves your visit. Enjoy the unique atmosphere of the 18th century with your private guide on our Catherine Palace tour. The guide will unveil all the mysterious secrets of this marvelous residence, and will be happy to answer all of your questions. 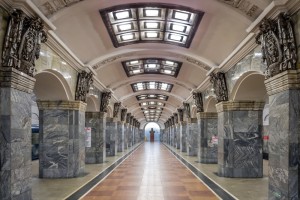 Few people know that one of St Petersburg tourist attractions is hidden underneath the city. St. Petersburg subway is only remarkably deep. It is so deep that people spend about 50 hours a year on the escalator alone. The subway by itself is like a museum. The vestibules and platforms are decorated with great artworks, precious stones, mosaics, and gilded and crystal chandeliers. It’s easy to navigate in the subway since all the stations have signs both in Russian and in English. The most beautiful stations belong to the red line of St. Petersburg subway. Pay extra attention to the stations called Narvskaya, Kirovskiy Zavod and Avtovo.

8. Rivers and canals of St. Petersburg 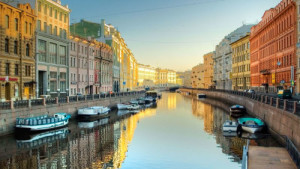 Undeniably, the most famous views of St. Petersburg are even more impressive when you see them from the water. A boat ride along St. Petersburg rivers and canals can give you this great opportunity. From the beginning, St. Petersburg developed as one of Russia’s sea and river ports. Water has always had a great significance for the city. That’s why most of St Petersburg tourist attractions are built right on the banks of St. Petersburg numerous waterways. In total, St. Petersburg has more than a hundred of different waterways: 93 natural rivers and channels, and 20 man-made canals. The main artery of St. Petersburg is the Neva, that brings so much fresh water to the Baltic sea, that it freezes in winter. The rivers divide the land into 42 islands, that are connected by almost 350 bridges. 21 of them are draw bridges. They open every night in summer to give the way for big ships and boats. There are plenty of options to join group city tours by boat, or you can order a private boat tour if you want to enjoy the intimacy of your party only. 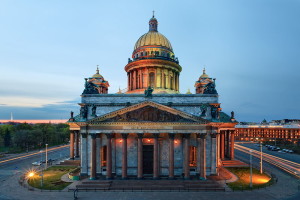 Among other St Petersburg tourist attractions, St. Isaac’s Cathedral deserves special attention. It is the biggest St. Petersburg cathedral and one of the city’s tallest structures. Its golden dome is clearly seen from different end of the city. It is a great monument of the architecture of the 19th century. The construction of the marvelous design took 40 years to complete: from 1818 till 1858. It is the city’s heaviest building as well. About 300 000 ton of natural granite were used for the columns that surround the cathedral. The giant dome is made of cast iron and covered with about 100 kilos of pure gold. The interior decoration strikes the minds of even the most demanding travelers: the abundance of gold, marble. malachite, paintings and mosaics does not leave cold anybody, who visit the cathedral. Today the cathedral is operating as a museum, but inside you may find a little corner, that serves as a consecrated sacred place. The people come early in the morning (7 a.m.), when the doors of the cathedral are open for free, to see the worship. The museum is open everyday except Wednesdays from 10.30 am till 6 pm. Great news is that you can even purchase the tickets online on their official webpage. 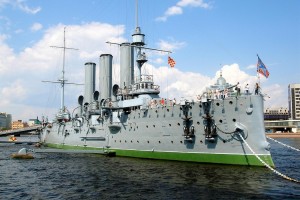 The legendary cruiser Aurora has played a big role in the Russian history. Her story is truly amazing. The ship was built in the Russian Empire in the end of the 19th century. The Russian tzar Nicholas II and his family attended at the ceremony of the launching the ship in 1900. The heart of the ship, the engine, is still operating, although today it’s never used. It is perfectly preserved and looks even better than a hundred years ago. Now it is anchored at the Petrovskaya embankment as a museum and a monument to the Great October Revolution. The ship is known to be one of the most iconic St Petersburg tourist attractions, that is closely connected to the 20th century history. Today, she is believed to have done a blank shot on 25 October, which symbolized the start of the Revolution.