Every city has its symbols. St. Petersburg is not an exception. There are many symbols of the city, including the State Hermitage, the Mariinsky Theatre, Palace square and others. However, not so many people know about an alternative symbol of the Nathan capital of Russia – St Petersburg cats. The most famous of them are Hermitage cats, a cat couple at Malaya Sadovaya street, Lab Cat of St Petersburg State University, and others. Let’s learn why St Petersburg cats are so special. 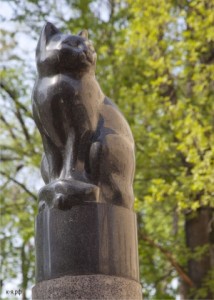 One of the first cat monuments in St Petersburg was a kitty, that was placed on a plinth in 2002. It is a monument to a Lab Cat. It is located in St. Petersburg State University courtyard on the Vasilievsky Island. The creation of the monument was initiated by the Department of Anatomy and Physiology of the University. It was meant to become a way to show appreciation of what lab cats have contributed to the progress of the mankind.

But let’s backtrack a little. Other St Petersburg cats,  Elisey and Vasilisa, «live» on parapets of two buildings of Malaya Sadovaya street. Bronze animals were created by a renowned St. Petersburg sculptor Vladimir Petrovichev. They were given gifted to the city as a symbolic meaning of love to cats. Although there are many theories as to what they might symbolize, the most popular one is related to the days of the Siege of Leningrad. During the Siege, the city suffered from a terrible shortage of food. On top of that it became flooded with rats that began to destroy the small food supplies. The city population at risk to die from starvation. However, the army managed to bring cats to the city, who had a very important task: they had to get rid of rats, which they did perfectly. In a few weeks the city was purged form the rats. Completely. Nowadays, the two bronze kitties are a popular tourist attraction. It is believed that if you throw a coin to the cat and it stays on the parapet, your wish will come true. Don’t forget to make a wish before throwing a coin! 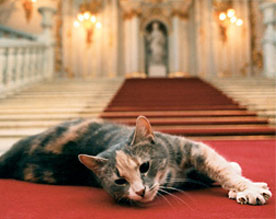 Almost 300 years ago, similar issue emerged at the State Hermitage. As soon as the Winter Palace was built it got inhabited with rats quite quickly. It was a clear threat to the art pieces in the building. Elizabeth of Russia heard of the same situation in the town of Kazan and how cats helped to solve it, quickly and efficiently. She ordered those cats and soon enough the Winter Palace was rat-free. Ever since, the Hermitage cats became an integral part of the museum history. Nowadays, they are officially considered a part of the Hermitage staff, each with a yellow bow, its own passport, a place to sleep and regular visits to the vet. They are not allowed to visit the museum halls and for the most part live in the basement where they hunt rats, however, you can see some of them outside during summer. our guide would be happy to share their stories about the Hermitage cats on a private tour to the State Hermitage. 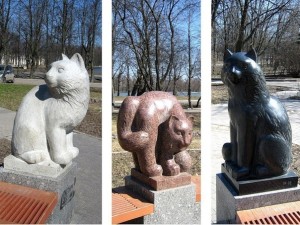 Other Cats in St Petersburg

There are also quite a few cats located outside the city. A perfect opportunity to meet the most popular ones is through your private tour to Peterhof. Three similar cats near the Red Lake are believed to make dreams come true. Each of them, however, is responsible for different things. The white cat will help with the family issues. The black one protects from mean people and bad vibes. The red one will give confidence and courage. The only thing you have to do is ask – whisper in the ear and be ready to have your life turned around.

If you are fond of interacting with those cats that are actually cats, not monuments or symbols, there is a cafe in St. Petersburg called «Respublika Koshek» (The Republic of Cats) with a division of Cat Museum, an art cafe, a library and a room full of different cats. Pet them, hold them, hear their stories from the staff – and enjoy an unforgettable experience.

As you can see, cats are indeed one of the most popular «unofficial» symbols in St. Petersburg. No wonder cards, magnets and mugs with cats on them are sold virtually everywhere. Pick your souvenir – and let St. Petersburg stay in your memory as the most cat-friendly city in the world. With Hello Russia Tours you’ll know the most unusual facts about St. Petersburg.