Visiting St. Petersburg would be incomplete without a tour to Peterhof Palace. It is one of the most fascinating former royal residences in the suburbs of St. Petersburg. Located on the southern coast of the Gulf of Finland (Baltic Sea) it stretches along the waterline for 2.5 kilometers (about 1.5 miles). The history of Peterhof goes back to the early 18th century, when it was founded as a monument to the triumphal victory over Sweden in the Northern War. Due to its richest history, incredible architecture and amazing parks Peterhof has become a great tourist destination.

The museum complex is located in 1-hour drive from St. Petersburg city center. Using public transport it will take you about 1 hour 30 minutes to get there. However, if you are unsure how to use St. Petersburg metro or buses a private tour to Peterhof can always be an option.

A classic program of Peterhof tour normally includes the main attractions of the museum complex:

Peterhof Palace is the heart and the center of the whole Peterhof ensemble. The modern outlook of the palace has been formed for almost 150 years. The construction was initiated by the Russian tzar Peter the Great in 1714. Nevertheless, today we can observe the results of a few palace alterations that occurred later. The biggest one took place during the reign of Peter’s daughter Elizabeth. It is during her time when the Palace acquired its splendor of baroque architecture.

On two sides the rectangular elongated building of Peterhof Palace is framed by the famous Upper and Lower Gardens. The idea of creating this park came to Peter’s mind after visiting Versailles that encouraged him in many ways. It reflects the best gardening traditions of French regular parks. Among other attractions the Grand Cascade is the most outstanding. The iconic view of the Grand Cascade is the first thing that appears on our minds when we talk about Peterhof. The Cascade is a unique system of beautiful fountains and waterfalls, accomplished with over 250 statues and reliefs. It’s definitely a must! 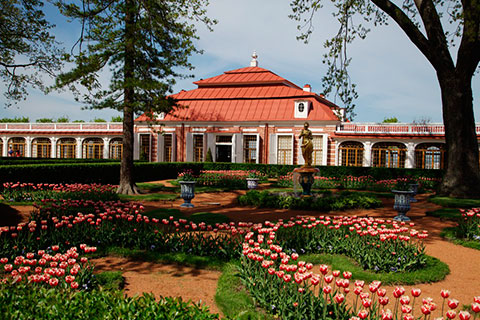 Touring the highlights of the Lower Garden you can’t pass by the Monplaisir Palace. This structure is reasonably smaller than the Peterhof Grand Palace, but not less important. Initially being constructed for Peter’s wife Catherine I, this Palace became a true family nest for the royal couple. Many visitors find that the Monplaisir speaks a lot about Peter’s personality because it took in his spirit. Not to mention, that the palace did not have any changes throughout times. Inside you can also find a nice original collection of Italian, Dutch and Flemish painting of the 17th-18th centuries.

There is, for sure, much more to see in Peterhof and the list can continue forever. During our tour to Peterhof you will get a great chance to see it all!

When is the best time to visit Peterhof?

When planning your trip to Peterhof it is essential to know when the museum is open for visitors.

Peterhof Fountain Park:
Open all year round, but in winter season (October – May) the fountains are closed. They start operating in the end of April. The season start is marked by a beautiful Fountain Festival. In 2017 the Fountain Festival is planned on May 20.
In May – September the park is open from 10 a.m. till 6 p.m.

The Monplaisir palace:
Open only in the summer time (May-September)