The history of Mariinsky theatre

Rivers, imperial architecture, rainy days and white nights – there are many must-see’s and must-do’s in St. Petersburg. One of, if not the most important – a visit to a classic St. Petersburg theatre for a ballet or an opera. With many options to choose from, you can never go wrong with the most famous one, the Mariinsky Theatre. 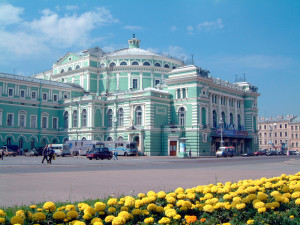 Its history dates back to 1783 when, at the behest of Catherine the Great, the St. Petersburg drama, opera and ballet troupe was established. Its first performances were held at the «Bolshoi Kamenny Theatre». Almost a hundred years later it relocated into a new building that emerged in the place of the burnt-down circus; this new building was named after Maria Alexandrovna, the first wife of Emperor Alexander II. Eventually, all performances were moved to this building, while the original one became home for the St. Petersburg conservatory.

Ever since, the Mariinsky Theater has hosted the most exquisite, inspiring and unique ballet, opera and theatrical performances. Among many, they include premieres of the following operas: Pyotr Tchaikovsky’s «The Queen of Spades», «Iolanta», «The Enchantress», Modest Mussorgsky’s «Boris Godunov» and «Khovanshchina», Richard Strauss’s «Elektra», Nikolai Rimsky-Korsakov’s «The Legend of the Invisible City of Kitezh», Anton Rubinstein’s «Demon» and many others. Ballets include most famous «Swan Lake», «La Bayadére», «Giselle, ou les Wilis», etc.

Nowadays, the theatre continues its traditions, inextricably connecting its heritage with innovations naming the renowned conductor Valeriy Gergiev as its art director. 2013 marked the beginning of the next era in the history of the Mariinsky Theater, with the new building, Mariinsky II, being introduced to the city. Between the imperial marble and Swarovski crystal lights, the new stage opens up endless possibilities to the artistic representation of the classic performances. Latest news about theatrical life of Mariinsky can be found on their official web page.

Hello Russia Tours will be happy to organize tickets to the Mariinsky Theatre for you! Just send us a request through our contact form.