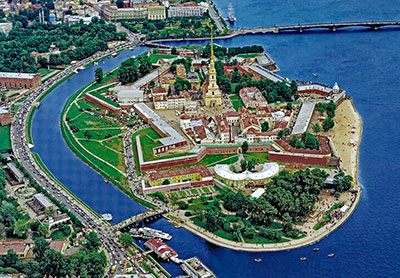 St Petersburg is Russia’s second biggest city. Although its history is relatively young, there are plenty of different stories that can excite you. Learn the most interesting facts about St Petersburg with us.

Peter and Paul Fortress is known to be the first structure of the city. It was founded in 1703 by the Russian tsar Peter the Great for the protection of the lands. Nonetheless, the fortress has participated in 0 wars.

Other interesting facts about St Petersburg

St. Petersburg is the 3rd biggest city in Europe. Nowadays the population of the city is more than 5 million people. It only yields to Moscow (over 12 million people) and London (over 8 million).

Since there are many rivers and canals in St. Petersburg (92 waterways), the city has a lot of bridges. Altogether there are 350 of them within the city. This includes bridges made of stone, cast iron, steel, reinforced concrete, and even aluminum.

The narrowest street in St. Petersburg is Repina street. The width of the street is just 6 meters (19.6 ft).

There are 268 different religious confessions and communities in St. Petersburg. The main confession is Orthodox Christianity, but among other religious temples you can find Catholic and Lutheran churches, Muslim mosques, Buddhist temples, and others.

St. Petersburg is known to be the cultural capital of Russia. No wonder! St. Petersburg accounts for 70 theaters, more than 20 annual international festivals of art, about 80 musical and theatrical contests, and over a hundred of exhibitions.

The City of Museums is an alternative name of St. Petersburg. There are 300 museums in the city, including the main Russian museum – the State Hermitage Museum Every year in May the so-called Museum Night is organized – it’s time when almost all of the museums are open at night and you can visit them buying one ticket only.

The climate in St. Petersburg is humid continental. Due to its location (coast of the Baltic Sea) there is no dry season in the area. The annual amount of precipitations is 634 mm.

If you visit St. Petersburg in the summer you might witness a real wonder of nature that locals call ‘White Nights’. It is a summer period when the nights stay very bright. The peak time for the White Nights is June 11 – July 2, when the day lasts for 19 hours.

The tallest structure of St. Petersburg is a TV tower. It is 310 m tall (1017 ft). Another famous tall structure is located in St. Petersburg historical center: St. Peter and Paul’s Cathedral is 122,5 m tall (401,9 ft). The Cathedral is known to be the burial vault of the Russian emperors and empresses and it’s definitely worth seeing.

The first railway that was introduced in Russia connected St. Petersburg and Pavlovsk. It was open on November 11, 1837 during the reign of Nicholas I.

St. Petersburg has one of the deepest subway systems in the world. The deepest station is called Admiralteyskaya. To get to the platform you need to go 86 m (282 ft) down in the grown.

Moskovskaya Square is one of the biggest in Europe. It occupies over 130 000 sq. m. (about 32 acres). In the Sovet Era the square was supposed to become the administrative center of Leningrad.

In the USA there are 15 cities that are called St. Petersburg. The biggest one is located in Florida. The city was founded by Peter Demens (originally, Petr Alekseevich Dementiev – Russian by origin). It is interesting that the train station in this city is an exact copy of the one in Tsarskoe Selo (suburbs of Russian St. Petersburg).