Among many other things that draw people to St.Petersburg’s most popular museum, the State Hermitage, is the Peacock Clock. This beautiful mechanism can be found in the Pavillion Hall. This hall was used for official reception. The history clock dates back to 1777, the time of Catherine the Great. Born as Sophia Augusta Frederica, she was raised in Prussia. At the age of 15 she converted to Russian Orthodoxy and married the future emperor of Russia, Peter III. The marriage was unsuccessful, along with the short monarchy of Peter III. In 1762 she performed a coup d’état, an overthrow of the Peter’s government. This eventually led to Catherine’s seizing the power over the Russian Empire. From this moment she was known as Catherine II, the Empress of Russia.

Catherine the Great was an ambitious monarch, who, after gaining the power, almost immediately started to implement her new ideas into Russian society. During her monarchy, she introduced many changes. For example, she introduced a renowned economic reform (which showed an incredible growth due to the liberation of import and export) and first paper money. She extended Russia’s borders and declared tolerance towards all religions. She also founded the first educational institution for girls, Smolny Institute for Noble Girls, and freed Russian the nobility from compulsory state or military service. 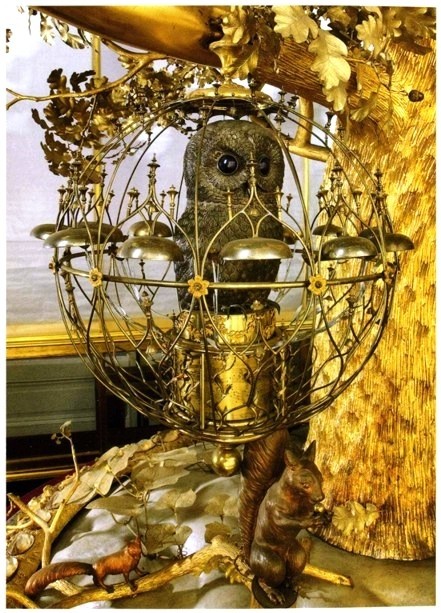 Catherine II was deeply committed to the ideas of Renaissance. Her time at the power is definitely the Golden Age of the Russian Empire. Among many other institutions, she established the National Library of Russia and, of course, the State Hermitage that started with her private collection. It is only later it became one of the oldest and largest museums in the world with more than three million items. The legendary Peacock Clock in Hermitage, mentioned in the beginning of the article, was added to the collection in 1797. The artwork of a British jeweller James Cox was gifted to Catherine the Great by a Russian military leader Grigory Potemkin. Around the clock, there are mechanical figures of three creatures: an owl, which, as a night bird, wakes up first, the peacock itself which symbolises the sun, and a rooster. Although this clock was made 250 years ago, it still works and is open to public during the open hours of the Hermitage.

With three million items located in the museum, it is difficult to find a way around it on your own. A private tour of the State Hermitage is a perfect opportunity to see the highlights of one of the biggest collections in the world, including the famous Peacock Clock. Your professional private tour guide will give you the most interesting facts about the Hermitage, tell the story of Russian monarchy and offer you an incredible insight into the history of the collection. Another unbeatable advantage of having a private tour guide is a line-free entrance to the museum, which, if you consider its popularity, is a very important issue. Book your private tour to the Hermitage here.