The Trans Siberian Railway is a legendary way that connects Europe and Asia. A trip on the Trans-Siberian can become one of the greatest travel experiences of a lifetime. The Trans-Siberian is not only the longest railroad in the world. It is also a unique adventure and a perfect chance to visit the most distant parts of Russia and touch its culture.

The original name of the railroad is the Great Siberian Way.
Being the longest railroad in the world it stretches across 11.024 kilometers (which is about 6.850 miles)
The Trans-Siberian railroad starts in Moscow and goes through 87 major East Siberian and Far Eastern cities, ending in Vladivostok – the biggest city in the Far East of Russia.
One of the railway stations of the Transsib is called Slyudyanka 1 – a remarkable building entirely made of marble.
The Trans-Mongolian railway is a branch of the Trans-Siberian that leads from Ulan-Ude to Beijing.
The railroad goes through the capital of Mongolia – Ulan-Bator.
The Trans-Siberian railroad goes through the area where the winter temperatures goes below – 60ºC (about -76ºF)
The shortest train trip will take you 6 days and 2 hours. In connection to this many trains running from Moscow to Vladivostok have showers, laundries and other services. 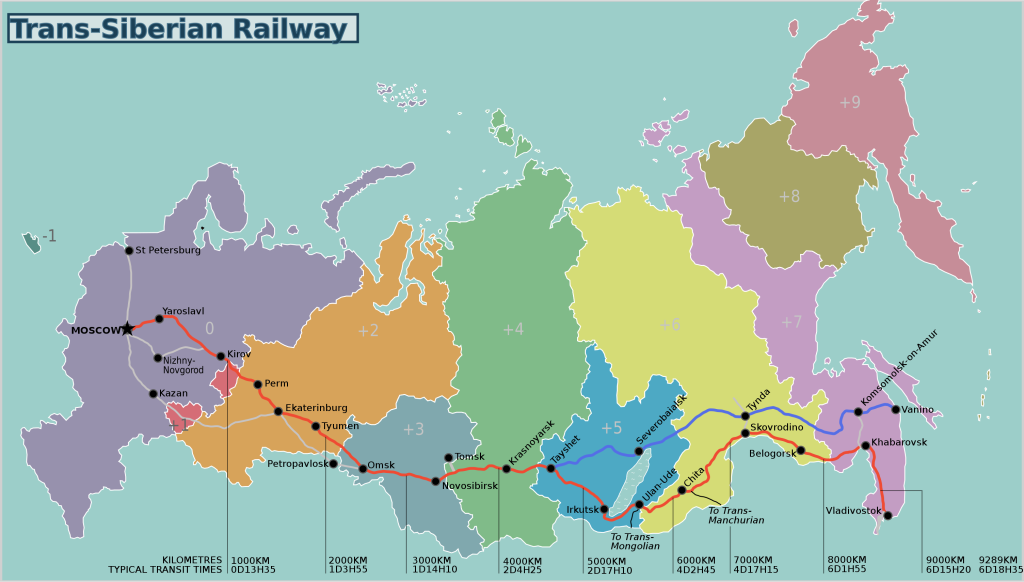 The Trans Siberian railway has become a popular tourist destination recently. Not only Russians, but also many foreign guests are striving to experience real Russia. Isn’t it an amazing feeling to cross the world’s biggest country from the west to the east? Trans Siberian railway Moscow – Vladivostok or Moscow – Beijing are among the most popular itineraries. It is a great chance to visit a number of big Russian cities, such as Moscow, Kazan, Yekaterinburg, Novosibirsk, and others. While doing your unforgettable Trans-Siberian trip you can explore the Ural mountains, mighty Russian rivers like Volga and Ob, the Baikal – the world’s deepest fresh lake, Altai mountains, and many other unforgettable places! Each of them do deserve your attention!